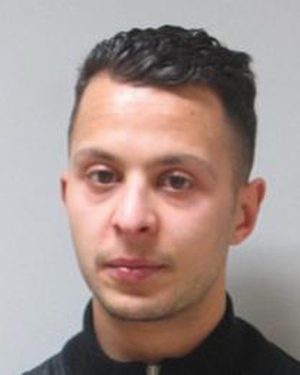 Salah Abdeslam, 26, is a suspect in last November's Paris attack. He was arrested recently in Brussels and is to be extradited to Paris. He and his brother, a suicide bomber in the Paris attack, both spent time in prison for dealing drugs.

Nearly all of the men implicated in last week's attack in Brussels and the November rampage in Paris have something in common – they are ex-convicts.

The two brothers thought to have blown themselves up in suicide attacks at the airport and metro station in Brussels spent time in prison. One was convicted of assault and bank robbery, the other took part in a carjacking.

They are a new breed of violent jihadi — part gangster, part terrorist — that appears to be be particularly receptive to the message of the Islamic State.

Lantin Prison, a minimum security detention facility about 10 minutes from downtown Liege, is one of Belgium's largest prisons. It houses about 960 inmates.

"Maybe for the United States it is a small one," said Philippe Massay, a guard at Lantin who provided a short tour outside its walls. "But here, for Belgium, it is a big one."

The prison has several floors that serve as a maison d'arret, which is meant to be a short-stay prison for those awaiting trial or sentencing. But stays at these facilities have been growing longer and longer, and at Lantin — and in Belgium generally — these units are overflowing.

Massay says the maison d'arret unit here has room for 365 inmates, but more than 700 are being held there. Some prisoners are sleeping on mattresses on the floor.

Officials close to the Brussels investigation believe Ibrahim el-Bakraoui started his transformation from local criminal to violent jihadist in a prison unit much like this one.

A Place To Be Radicalized

Massay says because they are designed for prisoners with short stays, there are few organized programs to keep inmates occupied. As a result, that early chapter of incarceration is when prisoners are considered particularly vulnerable to radicalization.

Massay, who has a gentle, empathetic quality, had a long career as a social worker before he became a prison guard five years ago. Not long after that, he got a masters degree in criminology, with focuses school bullying, terrorism and radicalization.

"I see radicalization in prison, sure," he says — in fact, a prisoner on his floor was convicted on terrorism charges. He was a member of al-Qaida's arm in Somalia, al-Shabab.

"I know there is at least one person [at Lantin] who is a real radical," he says. "I speak often with him and I feel he really is a radical. I have seen what he reads."

And Massay says he has watched him try to radicalize others.

"The scenario is always the same," he says. "This prisoner says [to another prisoner], 'OK, you are punished. Can I help you? Can I give you some advice?' And that's the way he took over the mind of other prisoners.' "

The prisoner has tried to seduce the guards as well, Massay says. "He tries to give me advice. He suggests books I should buy."

Those recommendations include Salafist texts written by radical imams.

Prison guards are supposed to report incidents of radicalization, but unlike Massay, his co-workers haven't been trained. He says they can't tell the difference between someone who is radicalizing an inmate and someone who is merely rediscovering religion.

The delivery of a Quran, for example, can get a prisoner written up — which to the prisoners smacks of discrimination. They feel they are being punished, essentially, for being Muslim.

Receptive To The ISIS Message

Luk Vervat, who taught English and Dutch in Belgian prisons for years, is now an activist for prison reform. We met him in front of the memorial to the victims of last week's attacks in downtown Brussels.

He believes discrimination is at the core of Belgium's radicalization problem.

"Even if you are born in Belgium, if your skin is brown you are considered a foreigner," he says.

With so few jobs in Brussels, employers tend to hire people who look like themselves, he says, so many in minority communities feel they have little choice but to turn to black market cigarette sales or drug deals.

Drug-dealing is how Salah Abdeslam, who soon will be extradited to France to face charges related to the November terrorist attacks, and his brother Ibrahim Abdeslam, who was a suicide bomber in Paris, made ends meet. Ibrahim Abdeslam met one of the Paris attacks' plotters, Abdelhamid Abaaoud, while they were in prison together.

Vervat says it's a vicious circle.

"If you have overcrowding and you have conditions where they lock up people like they do, you create a collective among the people involved, but also an association with the oppression elsewhere," he says. In other words, when ISIS calls for recruits in Belgium, the group has a receptive audience.

The Ministry of Justice in Belgium declined to discuss radicalization in Belgian prisons, but the reality of it can be seen in the path of Ibrahim el-Bakraoui.

Soon after he was released from prison on his bank robbery charge, he was discovered by Turkish authorities on the border of Syria, where officials think he was trying to join the Islamic State. He eventually returned to Brussels, where he blew himself up at the airport last week.

Taoufik Amzile, a businessman and entrepreneur in Brussels' Moroccan community, is worried that prison has become a rite of passage in some Belgian communities.

"It gives them a status," he says. "It makes them feel they count."

And there is concern that, if radicalized, they may come to view traveling to Syria and fighting for the Islamic State a route to that status and sense of belonging as well.

"There's a link between all these elements that creates a possibility of radicalization, that's clear," Vervat, the prison reform activist, says.