Twice a day, Angela and Nate Turner of Greenwood, Ind., put tiny strips that look like tinted tape under their tongues.

But the taste is worth it to her. The dissolvable strips are actually a drug called Suboxone, which helps control an opioid user's cravings for the drug. The married couple both got addicted to prescription painkillers following injuries several years ago, and they decided to go into recovery this year. With Suboxone, they don't have to worry about how they'll get drugs, or how sick they'll feel if they don't.

"You can function, but you're not high," Angela says. "It's like a miracle drug. It really is."

A body of evidence now shows that medications such as Suboxone are effective in putting the brakes on opioid use disorder, when used in conjunction with counseling. For Angela, the treatment means she can take care of their 3-year-old, and Nate can keep a job. 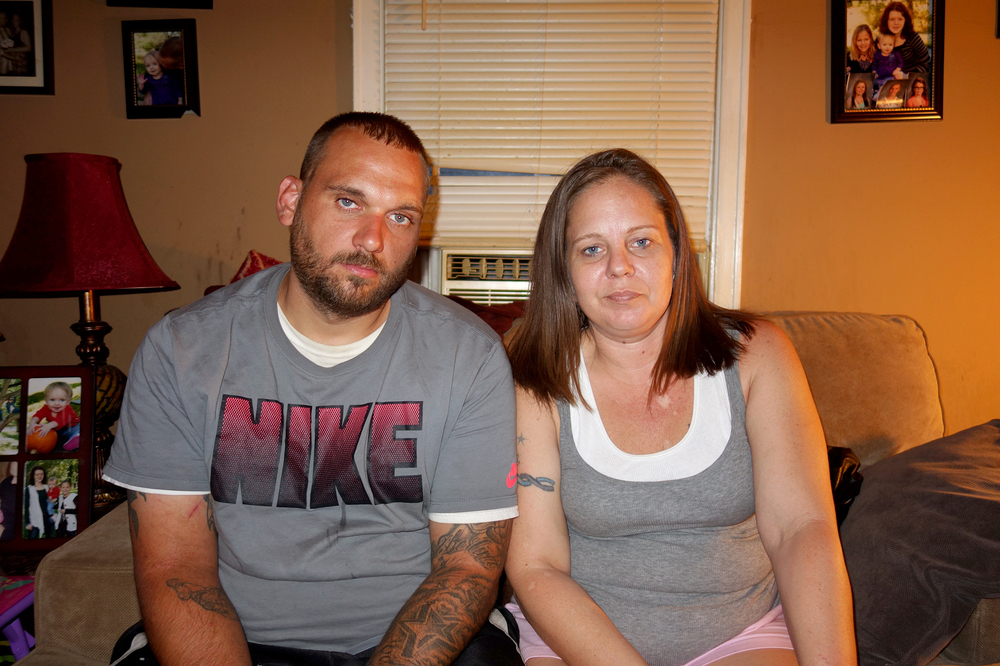 Nate and Angela Turner, of Greenwood, Ind., take the drug Suboxone twice a day to control their cravings for opioids and heroin. Nate says the drug has helped him hold onto his job and stay in counseling as he works to quit his addiction to painkillers.

But because of some companies' insurance rules, getting started on Suboxone — and staying on it — can be difficult.

Angela says after her doctor wrote her a prescription, she had to wait three days to get it filled. She spent those days in bed with nausea, diarrhea and muscle cramps — symptoms of opioid withdrawal. For Nate, the wait was five days. On Day 3, he relapsed and used heroin.

"I just thought it was over, that I wasn't going to make it back to the program," he says.

Suboxone is covered through the Turners' health plan, which is part of Indiana's Medicaid expansion, the Healthy Indiana Plan. But before the couple's insurance company, Managed Health Services, will pay for the drug treatment, their doctor has to get approval from the insurer — known as a prior authorization.

The prior authorization process adds work for doctors and their staff, says Dr. Andrew Chambers, a psychiatrist and addiction specialist in Indianapolis. With the phone calls, faxing and other paperwork, he says, three of his nurses spend about 30 hours a week going back and forth with the insurance companies.

"It's almost like when you take on a patient to treat opiate addiction, you also have to take on another patient called the insurance company," Chambers says.

Getting a prior authorization to prescribe one of these medications can take days or weeks, says Sam Muszynski, director of health care systems and financing with the American Psychiatric Association. He says the delays leave patients vulnerable to relapse.

"You may lose that opportunity right then and there," he says. "They may never come back."

Muszynski and policy analysts with the federal Substance Abuse and Mental Health Services Administration say requiring prior authorizations from insurers for addiction medication is a widespread practice in the U.S.

As of 2013, Medicaid in 48 states required a prior authorization for buprenorphine, the active ingredient in Suboxone. Chris Carroll, director of health care financing at SAMHSA, says that number likely has not changed much since 2013. He says treatment limitations like prior authorizations are part of "the dark shadows of the insurance industry."

Prior authorizations are one way insurers limit what they pay for, Muszynski says, and they use prior authorizations more often with mental health and addiction treatments, compared to other medical treatments. That's despite the 2008 passage of a federal law called the Mental Health Parity and Addiction Equity Act, which was supposed to end unequal insurance coverage for mental illness as compared to physical illness.

For instance, under the Turners' plan, insulin treatments for diabetes don't require a prior authorization. But Suboxone does.

Prior authorization requirements can also pressure doctors to change how they prescribe a drug such as Suboxone. Sometimes an insurer will push for a lower dosage than the doctor wants, or it will require a patient to start tapering the use of a medication even when the doctor thinks the patient needs more time.

"These rules and regulations for us completely block the correct provision of care," says Chambers. "And that's crazy."

For some insurers, a prior authorization expires after just a few months, forcing everyone involved to go back through the process of reauthorizing. In some cases, Chambers says, patients will even run out of medicine before a new prescription can be approved, which can force them into withdrawal.

Indiana Medicaid says it has started to allow some doctors to skip that initial back-and-forth with the insurance company. But Chambers says the changes haven't helped him much yet.

Clare Krusing, press secretary with the trade association America's Health Insurance Plans, argues that prior authorizations are not in place to limit treatment for patients with opioid addiction. Rather, she says, they're meant to ensure that patients receive proper care.

"Prior authorization is not just arbitrarily applied," she says. "Plans look at what the clinical guidelines are. A plan is going to make sure that before a drug is prescribed, the patient meets those guidelines."

"I can assure you, if I were on regular pain medicine, I'd be able to get them, no problem," he says. "No questions asked."

This story is part of NPR's partnership with Side Effects Public Media and Kaiser Health News.