Back in 2002, California passed a law that provides paid family leave benefits to eligible workers. In many ways, the law mimicked paid parental leave policies that are in effect in nearly every other country in the world. But it was the first its kind in the U.S.

Here's how California's law, part of of the state's disability insurance program, works: Most workers in the state have small deductions (less than one percent of their wages) withheld from each paycheck.

The program works sort of like the federal Social Security system, creating a pool of money employees can draw from if and when they need to take time off work to care for a seriously ill relative, or when they have a new baby.

New moms and dads get six weeks off at a little more than half their weekly pay — 55 percent, with a cap that's indexed to inflation each year.

Iris and Eli Fugate, who live in San Diego, say the paid leave gave them precious time to welcome their son Jack into the family. Iris took the full six weeks of leave after Jack was born five months ago. Eli took three weeks, and plans to spread the rest out over the next few months. 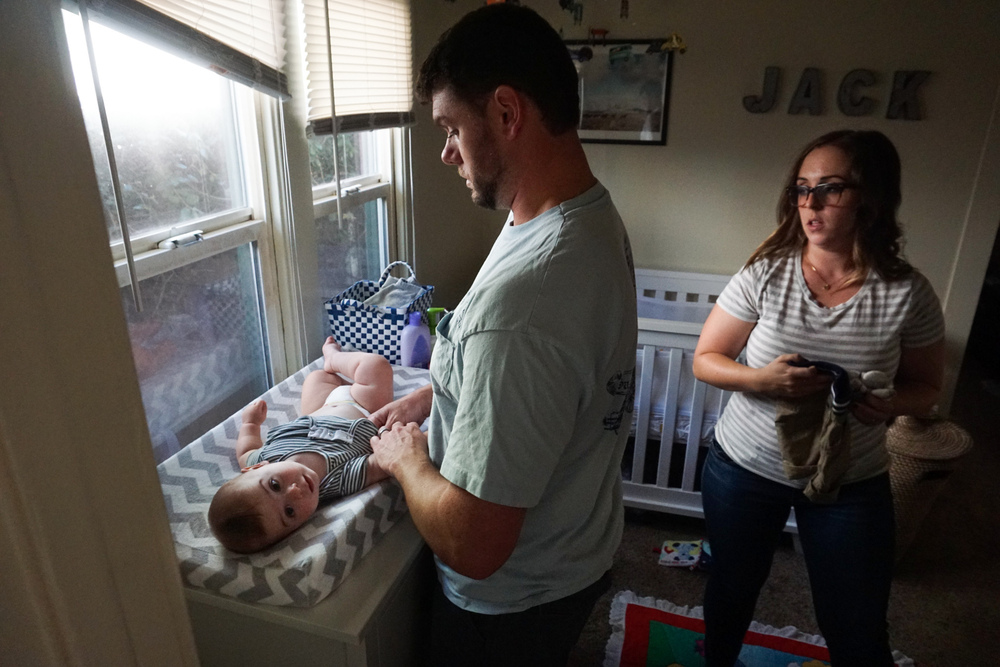 Iris Fugate says having the time with her husband, Eli, to jointly care for their baby in Jack's first weeks of life helped them learn how to parent together.

"We both got time to get to know him together," Iris says of that early time with baby Jack. "Really meaningful — I can't imagine it going any other way."

Eli agrees. "It was really important during that first week or two especially," he says. Being able to encourage one of his son's first milestones — turning over for the first time — and share the baby's delight, was priceless, he says.

Since the family leave law went into effect more than a decade ago, it's had a positive impact, says sociologist Ruth Milkman, a professor at City University of New York, who has studied the law and its history. Business interests initially opposed the law, Milkman says, claiming it would kill jobs and drive small business out of business.

But when she and a colleague surveyed large, midsize and small companies in California five years after the state's family leave law went into effect, they discovered those early fears hadn't played out.

More than 90 percent of businesses reported a neutral or even positive impact on their companies after the law. The positive impact had to do with improved employee productivity and morale.

That makes sense, Milkman says. "It's a new benefit and employees are happy about it."

Families too, have reported positive changes, she says. There's been a steady, significant increase in the number of new dads like Eli taking paternity leave to bond with their babies. And, since the law launched, the length of time new mothers like Iris breastfeed has doubled.

The law still requires sacrifice on the part of anyone taking the benefit. It doesn't provide a full paycheck — just 55 percent of an employee's weekly salary. The Fugates say living on a tighter budget each week wasn't easy, but the couple had enough saved to make that work. Eli works as a manager for a large grocery chain, and Iris is a lawyer.

But for many families, especially low-wage workers, living on half-pay is much tougher, or even impossible.

It was financially challenging to live on 55 percent of the family's income in the weeks after Jack was born, Iris Fugate says, but the couple had been able to save enough money to make it work.

Kitty Jensen and her husband Lasha Gabrichi, live in North Hollywood, where Jensen works as a personal assistant to a clothing designer. Her boss encouraged her to take maternity leave after her baby was born, Jensen says, and never pressured her to return to work early.

Still, in the end, she returned to work much earlier than she wanted to. At the time of their son Leo's birth, Gabrichi was out of work, which meant the new family was living on half of Jensen's moderate salary.

It was money, says Jensen, but it felt like "nothing!" The family still had to pay rent, utilities, telephone, food, health insurance, car insurance plus all the other new costs of having a baby — from medical bills to diapers.

"If you're if you're not in the upper middle class, I don't know how people survive on it," Jensen says. "We certainly didn't."

Jensen turned to her parents for help. They're not well off, she says, but contributed as much as they could. Jensen and Gabrichi also started selling possessions on Craig's list — "furniture and art stuff I had, vintage art pieces, chairs," Jensen says. "I just sold anything I possibly could — all year."

Despite the financial strain, Jensen says she's grateful for the time she was able take away from her job to spend with the baby. But many workers who are eligible for family leave don't take it because they are even more stretched, financially.

Beyond her survey of how companies were affected by the state law, Milkman also looked at whether Californians were able to take advantage of the family benefit. One third of those surveyed said they couldn't afford to take the leave. 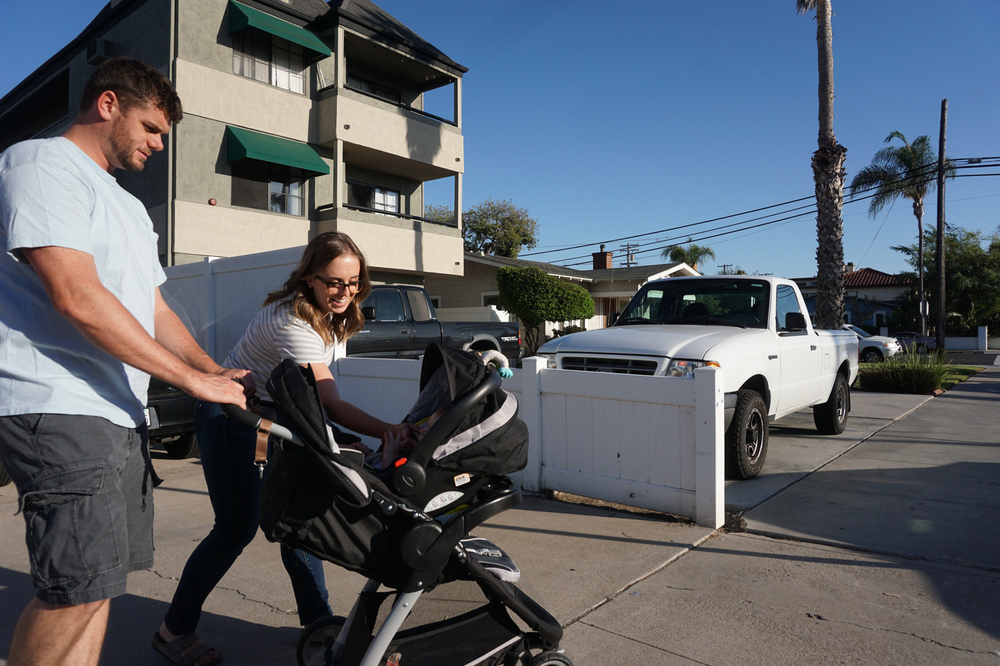 The Fugates still make time to stroll their San Diego neighborhood together. In a survey of California companies, more than 90 percent of businesses reported a neutral or positive impact on their companies after the 2002 California family leave law was enacted.

Even worse, says Milkman, more than half of those surveyed weren't even aware the law exists, she says.

"And the people who need it most — immigrants, young workers, poor people, low wage workers — they are the least likely to know about it," Milkman found.

Service industry workers, like Claudia Chi-Ku, who lives in Los Angeles, are often among those who don't realize they have the option of paid leave. Chi-Ku's worked in numerous restaurants, and is now doing housecleaning at a healthcare facility. But when she got pregnant with her fourth child several years ago, she was working for a large car wash chain.

"At that time, to be honest with you I had no idea — none whatsoever — about the paid leave law and the benefits it came with," Chi-Ku says. Even half a paycheck would have been a godsend, she says.

"I would have used that money," Chi-Ku says. "I really needed it at that time."

Today Chi-Ku works with advocacy groups like the Restaurant Opportunities Centers United, to help other low-wage workers understand their rights under the paid leave law.

And changes are on the way. Come 2018, leave benefits in California will be boosted to 60 percent of an employee's salary, and 70 percent for low-wage workers like Chi-Ku. State lawmakers have also worked to put more job protections in place for people who opt to take the leave.

Update on Biden's remarks on the Uvalde, Texas, school shooting