Civilians are trying to flee a tightening siege in the rebel-held parts of Syria's northern city of Aleppo, as government forces and their Russian allies continue to seize territory while trying to take full control of the city.

A new U.N. report suggests that hundreds of men have disappeared upon entering government-controlled areas of the city. The men are being separated from women and children, the report states, and "family members say they lost contact with the men, between the ages of 30 and 50, after they fled opposition-controlled areas of Aleppo around a week or ten days ago."

Many other residents have chosen to stay or are trapped in the remaining few neighborhoods that rebels have held, as NPR's Alison Meuse reports on Morning Edition. She reached a dentist named Salem Abu al-Naser who is trapped in one of the last rebel-held neighborhoods, which he says is being pummeled with artillery, rockets and vacuum missiles. "I don't even know how to describe the kinds of things that are landing on us," he tells Alison.

"These are people who love life. It's not like Aleppo is just full of a bunch of fighters or radicals," Abu al-Naser tells Alison, saying that in many cases they stay because they don't want to be homeless.

Meanwhile, U.N. negotiators are frustrated by the lack of progress in talks on how to help the civilians who are trapped. "[T]he Member States that are supposed to help us get access [are] poles apart on what is happening in Syria," United Nations Senior Adviser Jan Egeland told reporters on Thursday. Here's more from the U.N. on why the process is so difficult:

" 'I have never, in my many, many years of humanitarian negotiations, been in as difficult negotiations and as frustrating talks that produced nothing in spite of thousands of contacts with all of the parties, and it is with bitterness and frustration that we have to report that we have not been able to evacuate even the wounded,' he announced.

"In order to provide humanitarian assistance, cooperation is necessary from the Government of Syria, the Russian Federation, various armed opposition groups, opposition health directorates, and others who must all agree on where, how, what conditions, guarantees, protection standards, and logistics. 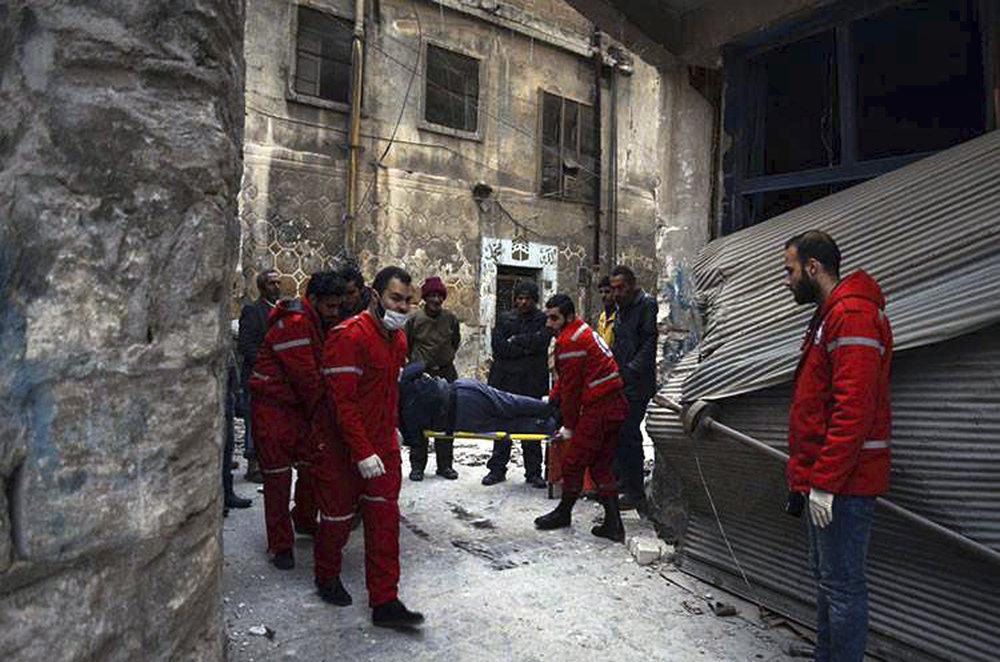 Members of the Syrian Arab Red Crescent carry a patient on a stretcher out of a medical facility in the Old City of Aleppo, Syria, on Wednesday.

The Red Cross and the Syrian Arab Red Crescent were able to evacuate about 150 civilians from a hospital near the front line, the groups said in a statement. Most of them "were disabled or in need of care," according to the statement. But rescue workers didn't get there in time for some of those staying at the center:

"Tragically, for some, the operation came too late: 11 people died before the SARC and ICRC team were able to reach the centre. They were either caught in the crossfire or died because they did not have access to the right medications. The SARC also evacuated their human remains, so they can be properly identified and returned to their families, and accorded the appropriate funeral rites."

#BREAKING: A brief of the #evacuation mission we carried out with @ICRC_sy yesterday in the old city of #Aleppo pic.twitter.com/5M0nBOQZQy

Today, the U.N. General Assembly voted to call for a cease-fire in Aleppo. NPR's Michele Kelemen tells our Newscast unit that the nonbinding resolution passed, 122-13.

But, she adds, "General Assembly resolutions don't carry the same weight as a Security Council one and Russia vetoed a similar resolution in the council earlier this week."

For Inmates With COVID-19, Anxiety and Isolation Make Prison 'Like A Torture Chamber'

Neuroscience Has A Whiteness Problem. This Research Project Aims To Fix It