South Korea's President Park Geun-hye dumped her prime minister and finance chief Wednesday amid a widening abuse of power scandal that's threatening her job. The scandal involves a secret adviser, Choi Soon-sil, who is suspected of wielding tremendous influence on the president and enriching herself as a result.

In and around Seoul's Gwanghwamun, a central square where ongoing protests take place, demonstrators show up to demand the president resign.

"I think people must feel baffled and angry, because our democracy and our power has gone," says Junhee Lee, who demonstrated against Park over the weekend.

Voters elected Park four years ago, but now they fear they unknowingly elected someone else along with her. News is mounting that Choi, an old friend of the president, has been a quiet center of power in Seoul all along.

Despite having no official government ties, Choi is accused of counseling the president on everything from her wardrobe to the national budget and North Korea policy, and benefiting financially from her influence. Both Choi and Park have admitted Choi revised dozens of presidential speeches in advance.

"Everywhere I go in Seoul, this is the only thing people are talking about," says Se-Woong Koo, a social commentator who runs the online magazine Korea Expose. "Corruption affairs in Korea are common, but at the same time, they're very complicated. Rarely do you see a corruption scandal so squarely centered on a single person, in this case being the nation's highest elected leader." 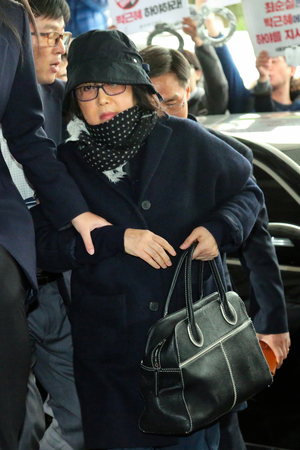 Park is trying to stem the fallout and shore up support by tossing out her closest aides and replacing key ministers. But the influence-peddling investigation of her confidant, Choi, is only getting started. And it has to go back some 40 years.

Choi is the daughter of a mysterious religious figure, Choi Tae-min, the leader of a small cult who befriended a young Park Geun-hye in the 1970s with claims he could channel the voice of Park's dead mother.

"He told her he could talk to her mother in his dreams. And Park Geun-hye's mother was telling him to take care of her daughter now that she was no longer in this world," Koo explains.

A 2007 U.S. diplomatic cable, released by WikiLeaks, flagged Park's closeness with this cult leader as a political liability for her. It said rumors were rife that Choi Soon-sil's father had "complete control over Park's body and soul during her formative years and that his children accumulated enormous wealth as a result."

The money that might have flowed to the cult leader's daughter over the years is part of prosecutors' investigation. On Wednesday, they requested a formal arrest warrant for Choi on charges of abuse of power and fraud. A Seoul court said it would determine as early as Thursday whether to approve the warrant for Choi. It's stemmed to evidence that she may have pressured Korean companies such as Samsung and Hyundai to pony up millions for nonprofits she ran.

"Of course we can say Choi Soon-sil instigated this corruption, but what do we say about these other companies who were out there, who knew that Choi Soon-sil was the power behind the president and tried to make her happy?" Koo says.

What happens next? The opposition Democratic Party is calling for an investigation into the president herself. Whether that will happen is unclear. It's also uncertain whether the mounting calls for Park's resignation will lead anywhere. Demonstrator Lee Junhee says the uncertainty troubles him.

"I think it's gonna be, like, chaotic. I don't think [South Korea is] gonna work as a government because so many people, and so many congressmen [are] against her," Lee says.

Park's approval rating fell to 9 percent Wednesday — for her, an unprecedented low.