If you're a farmer who wants to stay small and independent, you're under an increasing amount of pressure these days. By the Department of Agriculture's count, a startling 97 percent of all the country's farms are family-run — but that's because many small family farms turned into big family farms, or collections of farms, which turned into big businesses.

Smaller family operations, like Vern Jantzen's 300-acre farm in Nebraska, account for less than a quarter of everything produced on American farms. And there's no guarantee the younger members of the family, like Vern's two daughters, will want to stay on to continue the business.

This week on For the Record: one family's farm — the temptation to leave, and the struggle to stay.

All In The Family

Since it was bought in 1891, his farm has been the home and livelihood to four generations of his family, starting with Vern's great grandfather. That's also how long the Jantzens ran a dairy farm on the land, until recently. They've since had to cut costs, and have refocused their efforts on growing vegetables, thanks in part to who's next in the Jantzen line.

Vern's daughters, Katie, 26, and Karen, 24, are the newest generation to have lived on the farm. Growing up, their daily chores included garden work and feeding calves. But Karen didn't develop a relationship with the animals like her younger sister.

"I never named any of the cows or anything," she says. But Katie did: "Greg was my Holstein steer."

When the girls went off to college, Karen admits she missed the sounds of the cows and seeing the stars every night. Instead, she heard the sounds of cars and saw the lights of the big city of Winnipeg, Canada. Still, she didn't look back. She grew interested in international affairs, eventually landing in Seoul, South Korea.

Katie explored other options, too, in Virgina.

Meanwhile, Vern and his wife, Delores, figured they were going to be the last members of the Jantzen family to run the farm. Each year it grew harder to turn a profit. So, in 2010, after a particularly rough winter, Vern decided it was too expensive to keep the dairy operation going.

"I just thought, man, this is going to be a really big hole to crawl out of. And when you have girls that are interested in other things or don't express an interest in coming home to farm, I just thought, 'You know, I don't know if I want to work this hard to get this all straightened out — and then, for what?' " Vern says.

"There were a lot of days when I did not walk in the dairy barn because that just was — I didn't have to and I didn't want to, let's put it that way." 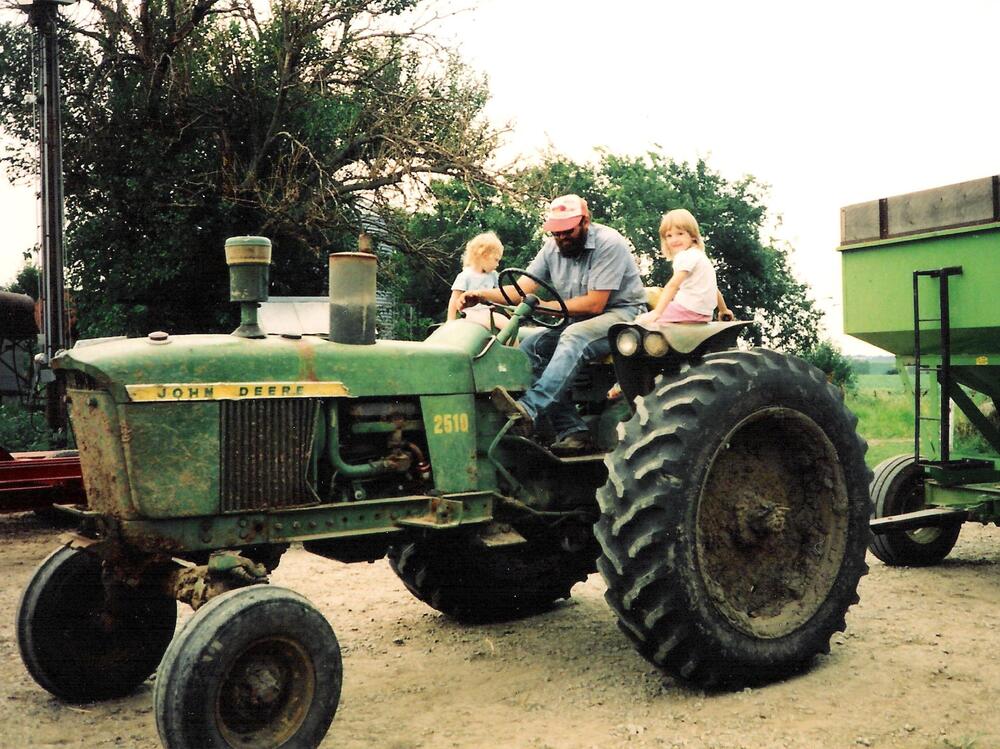 Karen (left) and Katie — still young girls at the time this photo was taken — sit with their father, Vern, on the family's tractor.

Is A Revival On The Horizon?

Today, though, the Jantzen farm could be on the brink of another transformation. Vern's eldest daughter, Katie, began to grow interested in local farming during college.

"On most farms we raise commodities. She was interested in the idea of, let's raise food," Vern says.

Katie sees the benefit of locally sourced and locally grown food, which also happens to be environmentally friendly.

"Typically corn and beans either get exported to another country or turned into ethanol or shipped off to another state to a feedlot," she says. "It's certainly hard for me to see a lot of meaning in that."

Her dad's been supportive of the new ideas she has for the family farm.

"I said, if you want to do that, I said we'll figure out a way to do that," Vern says. "There should be a lot of manure left over there that you can use for raising vegetables."

Karen, for her part, isn't sure exactly what her career is going to look like, but she thinks it'll probably be something back in Canada, working with immigrants and refugees — definitely not farming like her sister Katie.

And there aren't many Katies out there. The Center for Rural Affairs says less than 6 percent of Nebraska farmers are under the age of 35. Research by Iowa State University says half the state's farmers over 60 have no successor.

It's easy to see why. Vern has had to pick up part-time work as a bus driver to make ends meet because farming just can't cut it anymore.

Of course, that concern — whether or not she's going to be able to make a living as a farmer — has been on Katie's mind.

"I think the majority of farmers in this country have some kind of outside income whether that's a second job or a spouse's job, and so all across the board farming is tough," Katie says. "It's hard to make a living, and so that's one of the things I'm really trying to crunch the numbers on before I make a decision whether or not to do this."

Her dad has his own reservations, but he says it's worth giving Katie's plan a shot if it means keeping the farm in the family.

"I told my wife, I said I'm going to do whatever I can to help her see if this'll work, and I said if I have to finance her a little bit, I have no problem doing that, because my dad financed me when I got started."

Looking to the future, say 100 years from now, what does Vern see growing on the Jantzen farm?

The tiger count in Nepal has tripled in recent years