Examining The Lure Of ISIS In 'Another World'

Examining The Lure Of ISIS In 'Another World'

In a darkened London theater, the first thing the audience hears is the rhythmic chanting of an a capella Islamic State anthem.

Another World: Losing Our Children to Islamic State, currently at the National Theatre, is a play about young people seduced by the group. The main characters are three mothers whose children left their homes in Europe to join ISIS.

In one scene, a Belgian mother named Yasmine recounts how she found out her 20-year-old son had left for Syria. He'd told her he was going on a beach vacation to Morocco with a friend.

"He phoned his brother, telling him he had entered the land of Sham, and that he didn't want to come back here — that he didn't belong here anymore in this country," Yasmine says. "I heard this word, 'Syria, Syria' — and I felt the world fall on top of me. I didn't see it coming. I haven't done my job as a mother properly."

This is verbatim theater — a mix of journalism and art. The whole script is taken directly from interviews with real people, including three mothers whom director Nicolas Kent interviewed last year at a community center in Brussels' largely Muslim neighborhood of Molenbeek. 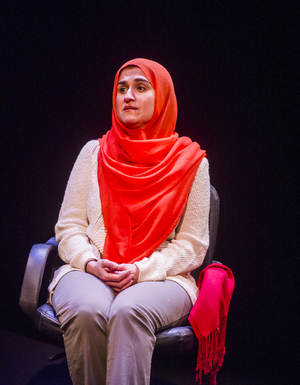 Actor Nathalie Armin plays a mother whose son traveled to Syria to fight for ISIS. "I heard this word, 'Syria, Syria' — and I felt the world fall on top of me," her character says. "I didn't see it coming. I haven't done my job as a mother properly."

"We don't change anyone's words. We obviously have to cut them down because we have 50 hours of interviews, but the play lasts only two hours," Kent tells NPR backstage. "So this is an edited version, but it sticks with what people have said and the spirit of what they've said."

Over six months, starting last summer, Kent also interviewed British anti-terrorism officials, a former Guantanamo Bay detainee and Gen. John Allen, who at the time was President Obama's adviser on ISIS. All their words form parts of the play.

The actor who plays Yasmine, Nathalie Armin, listened to tapes of interviews with the real Yasmine in French — even though she doesn't speak the language.

"I was very — is seduced the right word? [I was] taken by her pauses. The rhythms of her speaking are what struck me while I was listening," Armin says. "I suppose that's inevitable if you don't understand what somebody is saying — you listen to it almost musically."

In the fall, just as Kent and the play's co-creator, Gillian Slovo, were finishing the script and rehearsals were already underway, bombs went off in Paris — and four months later, in Brussels.

"So the story has surrounded us in every way," Kent recalls. "We started being at a distance to the story, and we landed absolutely in the center of the story."

Before staging the play, Kent, Slovo and some of the actors returned to Brussels to share the final script with the women whose words form its basis. They discovered something terrible.

"We went to Molenbeek to visit the characters that we play — the mothers," Armin says. "But the mother I play wasn't there. We discovered from the other mothers that the reason for this was that she found out her son had been in the Paris attacks."

Yasmine's son was one of the suicide bombers who blew himself up outside a Paris soccer stadium on Nov. 13, part of coordinated attacks that killed 130 people, for which ISIS claimed responsibility. 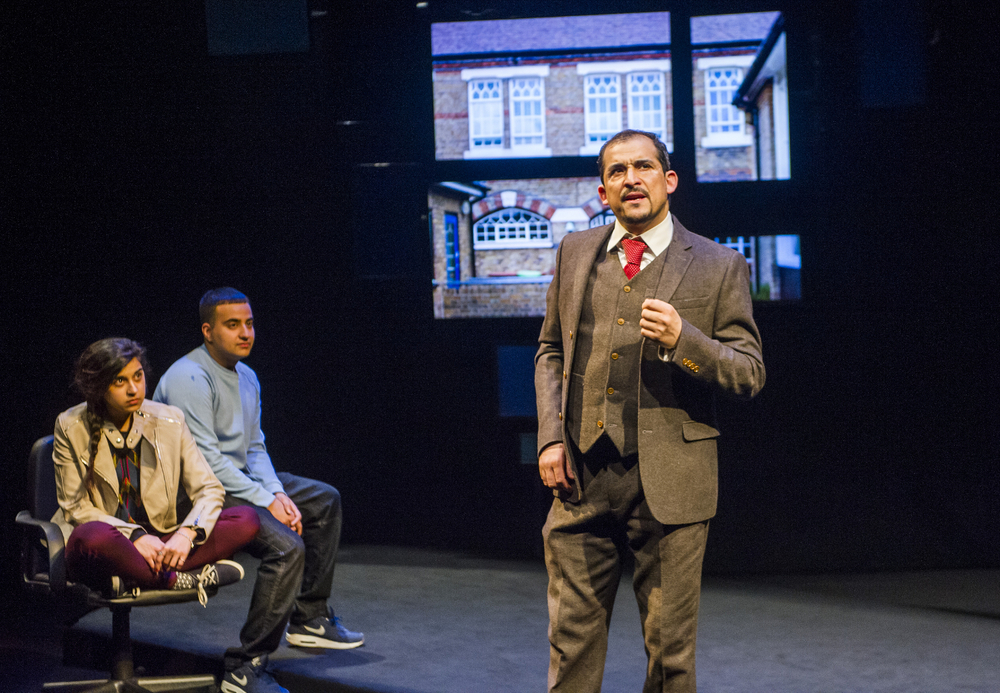 Actor Nabil Elouahabi (right) plays a lawyer working with radicalized youth in the London production of Another World: Losing Our Children to Islamic State, which closes Saturday at the National Theatre.

Kent decided to change the script at the last minute to include what happened. So at the end of the play, Armin pulls back her headscarf and breaks character. She explains what happened when they went to Molenbeek that day, and what they learned.

When that part of the play is performed, "You can hear the audience gasp — as we did when we heard it," Kent says.

Another World: Losing Our Children to Islamic State closes this weekend at London's National Theatre. But later this month, it will be staged again — at a high school in a poor, largely Muslim area of the British capital.

Hit book 'The Lovely Bones' was based on a real rape. The accused is now exonerated

The Dow just had its worst day all year

Elbow tugs on the strings of childhood, life and death in album 'Flying Dream One'