Compassion Drove Dad To The Salad Bar — That, And Fear Of Alien Abduction

Compassion Drove Dad To The Salad Bar — That, And Fear Of Alien Abduction

A few years ago on Father's Day, my dad, who was then living in Taiwan, forwarded the family a special holiday coupon to one of his favorite places in the world: Souplantation. A sort of glorified salad buffet, Souplantation is the kind of chain restaurant you go to with your family after church or sports games, particularly after the ones you've lost. The food doesn't inflame the senses or your digestive tract. In his email, he urged us to take advantage of the coupon on his behalf— with an exclamation mark and a note of regret. I imagined him alone in his high-rise condo in Kaohsiung, looking out onto the leafy muddle, dreaming of pre-washed chlorophyll.

My dad became vegetarian in the '90s. He meditated regularly, and had a particularly intense session in which he saw humans as livestock raised by aliens. This wasn't so weird back then. Our favorite show was X-Files, and also Sightings. The preeminent threat was alien abductions. That summer of 1995, the popular water cooler topic at dad's work was the Fox TV special Alien Autopsy: Fact or Fiction? Dad had apparently spent a considerable amount of time theorizing about extraterrestrial food chains with his coworkers at the computer wholesale company where he worked in technical support.

One day he came home and announced he could no longer eat meat. Why not? I remember this announcement sent me into a brief panic. My favorite foods were burgers and dumplings, and already, the opportunities to eat them had dwindled since my grandparents from Taiwan had come to live with us several years before.

My grandparents, laconic and mysterious, were also very vegetarian. They belonged to a religion called "The Persistent Way," which combined elements of Buddhism, Taoism and Chinese ancestor worship. My grandma told me we had to be vegetarian because we believed in reincarnation. Each time we ate a pig or chicken, we risked eating one of our ancestors. You just never knew when you'd be biting into a forebear.

I really didn't know how to feel about that. The ancestors whose portraits hung above the altar didn't look very sympathetic. Thin-lipped and grim, they looked like they worked in orphanages. I was scared of them, and felt conflicted about possibly eating them. Should I feel revolted? At school we'd read Charlotte's Web, so I knew that the key to empathy was to imagine these ancestors as capable of witty internal dialogue. Time was a pool party, a great ocean of past and present, and everyone bobbed inside it, the ancestors and me. Rubbing elbows, Marco Polo. But it didn't work. Then again, it was immaterial whether or not I understood the theological underpinnings of the Family Laws. The elders had spoken, and they had to be obeyed. Chens Do No Eat Meat.

Perhaps to counter our rising indignation, my dad assured my sister and me that his vegetarianism was voluntary and not an attempt to placate his parents. His decision was based on a feeling of compassion for animals, not some superstitious belief that eating animals would accumulate bad karma. Since I did not want to think of his vegetarianism as an act of betrayal, I clung instead to his alien explanation. It seemed, to my 10-year-old brain, intuitive enough, following the logic of feeling. I imagined the sum of my existence boiled down to pure caloric value. How would I like to get sucked into a UFO to be used as groceries? I wouldn't like it at all. So it wasn't nice to do it to animals, either, as good as they tasted. 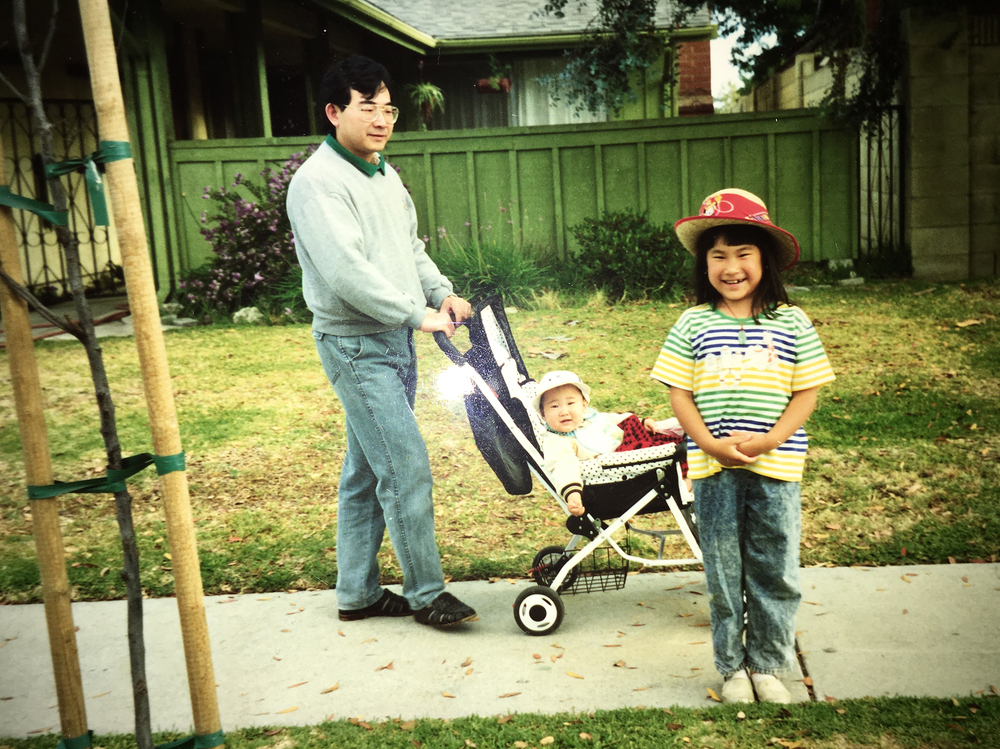 Though dad was happy to let us eat meat whenever we felt like it, my grandparents prohibited us from even bringing it into the house. So my mom changed up her cooking to accommodate them, which meant that she also couldn't use garlic and onion and other alliaceous plants, as they were considered impure. Not that we had much voting power to begin with, but losing one important member of our meat-eating cohort guaranteed that we had no chance of bargaining. My sister and I endured the soggy plates of sautéed sweet potato leaf and ginger, the slimy globs of gluten simmered with seaweed and star anise. We ate without complaining, exercising compassion for my parents. We didn't want to give them grief. Each bite of egg, tomato, hollow leaf, cabbage, every slurp of bland corn soup was an exercise in compassion.

On special occasions, my mom would buy fake meat products from a Buddhist grocer in nearby San Gabriel, Calif., and I would sift through all the vacuum-sealed packages, grumbling, wishing for ribs. It seemed hypocritical to me that these products were manufactured to resemble animals. In spirit, we were still eating "salmon" — pink soy patties covered with mats of seaweed skin. We were still picking at fried nubs of gluten with popsicle sticks for bones. All the violence of the encounter was still implicit in the form. Everyone's compassion seemed phony.

"Grandma and grandpa are always saying they don't want to kill sentient beings, but I've seen her squish flies like it's nothing," I'd say.

"She say amituofo before she does it," dad would say. "She say sorry to fly in her own way."

"Why's she always talking about compassion when she doesn't have any?" I'd shoot back. "I don't think she has any compassion. For example, she has no compassion for my need to eat meat."

"OK. But you have to be compassion."

We are probably having this dead-end conversation in the car while driving home from morning swim practice. I am probably in the passenger seat, being treated to a Burger King sausage biscuit breakfast sandwich, ungratefully waving it in his face to get him to cheat. I was always trying to tempt him with meat products by wafting what I thought were irresistible odors into his face. Lately his diet had become dangerously anemic: He seemed to subsist entirely on saltines and handfuls of Ibuprofen.

"Stop it! Stop! You want your old daddy to get diarrhea?"

This was the other thing he used to say to get us to stop tempting him. After you quit eating meat for a while, your stomach simply loses the ability to digest it. I sank back into my seat. I couldn't understand compassion, but I could understand diarrhea. We both had codes we could understand. With his analytical brain, he had decided that the code of compassion would account for all the paradoxes of his life. It would account for why he spent his entire life running away from his parents, only to invite them back in to stay. Why he couldn't stomach the idea of existing for the gustatory enjoyment of aliens, and yet here he was, an instrument of his parent's desires. I sighed and finished the sausage patty alone.

As my parents got busier, struggling in their immigrant way to maintain equilibrium, my grandparents grew more vociferous about our supposed meat eating. Even when we weren't eating meat, they would accuse us of eating meat-tinged items. (They eventually got a separate fridge so as not be contaminated by our bad karma.) We stopped eating meals together. The big round dining table with the lazy Susan became a piece of furniture in a showroom.

Mercifully, it was just when our family had atomized into our own miserable corners of private eating — me with my unobtrusive bowls of cereal, my sister with her microwaveable cheese and broccoli Hot Pockets, my mom with whatever leftovers grandma left, my dad with his columns of saltines — that we discovered Souplantation.

Souplantation! Where to begin. The colors, the smells, the cheerful clatter of communal eating. We went there on weekend afternoons, just the four of us. My parents, giddy with freedom, piled their plates like canvases. Spinach green with mottled iceberg, a splatter of carrots, a drizzle of creamy white. My sister and I often skipped the salads — unless it involved chicken or tuna — and went straight to the beef chili and clam chowder. We ate baked potatoes as a platform for eating bacon. We ate towers of soft serve with gummy bears. We ate until the effort it took to eat made it possible to eat more. "Only three plates?" My parents would say. "Let's get our money's worth." We leaned back, we did squats, we made room. Souplantation was our family room. For once, we didn't have to exercise our compassion. Well, we did. We were exercising compassion for ourselves.

In the last few years, my dad has slowly resumed eating meat. He cited some study about older men and protein and the risk of getting a flat butt. In his 60s, he needs to start thinking more seriously about his health, he said. This instinct for self-care is also new and cheering. It seems like a reassertion of life, of the right to exist vigorously. And now that my grandparents have both passed, he's come back to live in California again, reunited with my mom. They run the house the way they like. On weekends, after a stroll in the Arcadia Arboretum, they go to Souplantation together. It seems they've entered another phase of adulthood, one that finds them, finally, on top of the food chain. The last time I was home, I watched my dad nibble a piece of pork like a rabbit would a carrot. It made me incredibly happy.

Anelise Chen is the author of So Many Olympic Exertions (Kaya Press, 2017). Her work has appeared in The New York Times, Gawker, The Morning News, The Rumpus, VICE, and BOMB Magazine. She writes and teaches in New York City. Follow her at @anelise_chen.