Community-Based Care Can Reduce The Stigma Of Mental Illness

Community-Based Care Can Reduce The Stigma Of Mental Illness

Mental illness has been part of human society throughout recorded history, but how we care for people with mental disorders has changed radically, and not always for the better.

Records indicate unusual tolerance of bizarre behavior. When 18th century Pastor Joseph Moody of York, Maine, unable to face crowds, delivered sermons with a handkerchief covering his face, his behavior was tolerated for three years before he was relieved of his duties.

As urban areas grew in size and number, a transient poor population with no access to family support led to almshouses, the first form of institutionalization, inspired by 18th century reforms in Europe.

A Philadelphia Quaker who had visited an English retreat brought the idea to this country and in 1817 founded the Friends Asylum, a self-sufficient farm that offered a stress-free environment known as "moral treatment." Other private asylums followed, but they soon became overcrowded. By the late 19th century, this was addressed with larger state hospitals, which soon became overcrowded as well.

People with mental disorders are more likely to be stigmatized owing to fear and misunderstanding when they aren't part of the community. And stigmatization can discourage those with a mental disorder from seeking or complying with treatment. It also can lead to people being institutionalized against their will, more to protect the public than to provide compassionate care for those with mental illness.

In the mid-1950s, new antipsychotic medications offered relief from some of the most disabling symptoms of schizophrenia and other major disorders, such as psychosis and hallucinations. And in 1963, President John F. Kennedy's Community Mental Health Act shifted funding from large state hospitals, which had been plagued by scandal, to small-scale community-based mental health centers. With deinstitutionalization, the inpatient population dropped from over half a million in 1955 to about 60,000 by the end of the century.

By 1977, federally funded centers were serving close to 2 million people a year in 60 community mental health facilities. But the law was never adequately funded, and a national standardized system of community care did not emerge. As a result, people began to associate mental illness with homelessness or acts of violence, though the vast majority of people with mental illness pose no threat.

That raises the question of whether it's possible to reduce stigma so that those with a mental disorder are not feared and shunned. Patrick Corrigan, director of the National Consortium on Stigma and Empowerment, has investigated three approaches to reducing stigma: protest, education and contact.

In one study, subjects received information regarding mental illness in the context of the three approaches. Statements meant to induce a sense of moral outrage protest produced no stigma reduction. Both education and contact with someone known to have a mental illness did produce significant changes in attitude — less blame toward persons with mental illness and greater confidence in their chance of recovery — and encouraged future contact with those known to have mental illness. Previous contact mitigated lingering stereotypes more than education. 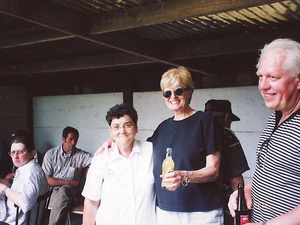 The author (second from right) with boarders from Geel during a fishing outing in 2007.

To get a sense of how it is possible for community members to have contact with those with mental illness without inciting stigma and fear, it helps to take a look at present-day communities where that happens. For centuries, in Geel, Belgium, community contact has been an everyday event for those with mental illness, with the state paying families to care for "boarders" in their homes. Modern-day Geel combines community care with medical care and psychotherapy, as well as hospitalization if needed. (For more modern-day Geel, see Invisibilia's story here.)

In the United States, variations in state funding affect the quality of public mental health care. But dozens of programs offer evidence that it is possible to build sustainable fostering communities. 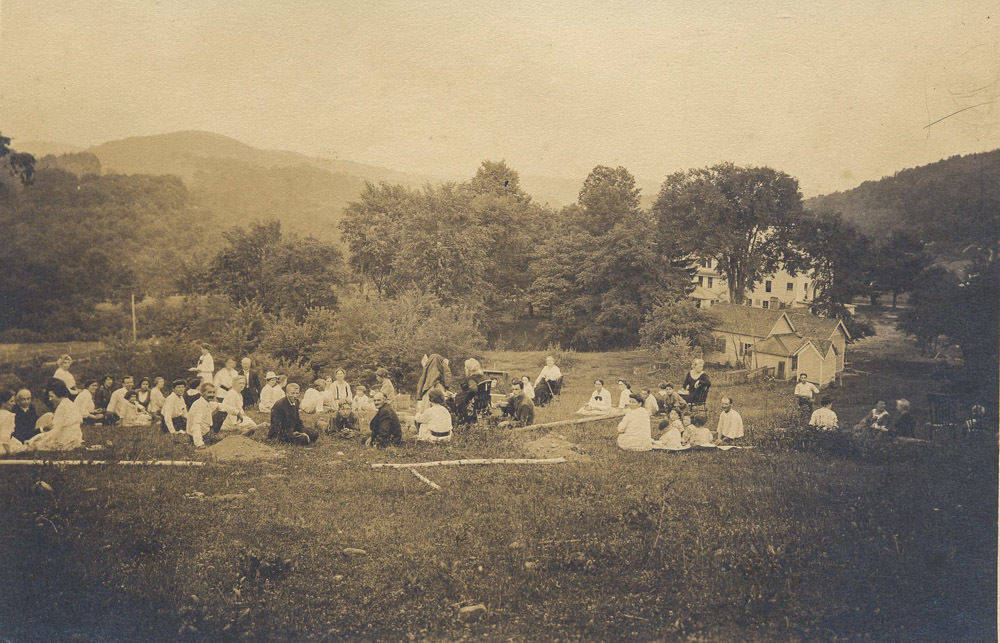 Community members enjoy a picnic on Gould Farm in Monterey, Mass., in the 1920s. Work on the farm remains a key part of the therapeutic process.

Gould Farm, a working farm established in Monterey, Mass., in 1913, was the first modern-day residential therapeutic community in the U.S. Here patients are referred to as guests, and all staff — and their families — live on the farm. Daily work, on the farm or at its bakery or cafe, is a key aspect of the therapy.

Today Gould Farm is one of more than 30 members, in 15 states, of the American Residential Treatment Association. These programs are not covered by Medicare or Medicaid, but some ARTA members help families secure financing; health insurance may cover part of the cost. For example, more than 50 percent of Gould Farm "guests" receive financial assistance. But, for the most part, people must assume the expense of a six- to 12-month stay, ranging from $400 to $900 per day.

In Chicago, the Thresholds organization offers services to people with mental illness in more than 100 locations in the city and surrounding counties. It was founded in 1959, by women from Chicago's National Council of Jewish Women who attended a mental health educational conference and learned that people who had spent years in mental hospitals were often left to fend for themselves upon release. It started as a small volunteer organization that offered social activities, then grew to include residential programs, supported employment, housing-first, and treatment for people with both mental diagnoses and substance disorders. Last year, 75 percent of its services were delivered in the community.

Thresholds is one of 15 programs I've visited across the United States in decades of researching models of community care in mental health. Those 15 are a small sample of programs of varying sizes that offer affordable housing or help in finding such housing; occupational training and placement; recreational opportunities and more.

Those with a mental disorder can live a meaningful life, if their community facilitates community contact. It's been happening in Geel for centuries. It is happening in the U.S. today. The voice of stigma originates in the community, but so does the voice of hope.

Jackie Goldstein is a professor emeritus of psychology at Samford University and author of the 2016 book Voices of Hope for Mental Illness: Not Against, With.

This story is part of Invisibilia's episode on solutions, including a report on how residents of the town of Geel, Belgium, have been taking in strangers with mental illness as boarders for centuries. We also talked with Mr. Kitt, who found sobriety and his calling as an artist after he moved off the streets into a Broadway Housing Communities apartment in New York. And NPR reporters Pam Fessler and Nate Rott visit community housing sites on the East and West coasts that aim to provide sanctuary, not just shelter.