Carolina Curious: How Will Opportunity Zones Shape Our Cities?

Carolina Curious: How Will Opportunity Zones Shape Our Cities?

When the Tax Cuts and Jobs Act was passed, the legislation included six pages that could have a big impact on cities. It’s a program built to entice long-term investment in low-income communities, areas that are called "Opportunity Zones."

Listener Walter Fyler wants to know more about the program, and what the formation of Opportunity Zones could mean for our cities.

For this edition of "Carolina Curious," Eddie Garcia spoke with business and city leaders in Winston-Salem in search of the answer.

In downtown Winston-Salem, it seems like a new brewery or restaurant is opening up every other week.

Sounds nice — but that’s not all.

“On the roof, we’re putting five see-through igloos so you can use the roof bar in the winter,” he says.

Yes, a rooftop igloo bar. You won’t have to go to a major metropolitan to try this one out. Part of the reason is that a large swath of downtown Winston-Salem has been designated as an Opportunity Zone.

That’s a geographic region identified as economically distressed, where certain investments made there get tax advantages. These regions are called census tracts, and North Carolina has 252 marked as Opportunity Zones.

Winston-Salem has 10 of them, 11 if you include the county. And this big tax break can entice developers.

Mark Owens, CEO of the Winston-Salem Chamber of Commerce, says capital is flowing from all over into the city.

“It has attracted investors from New York, different parts of the country, to look at Winston-Salem,” says Owens. “And maybe they have looked before, but they’re looking in the Opportunity Zones.” 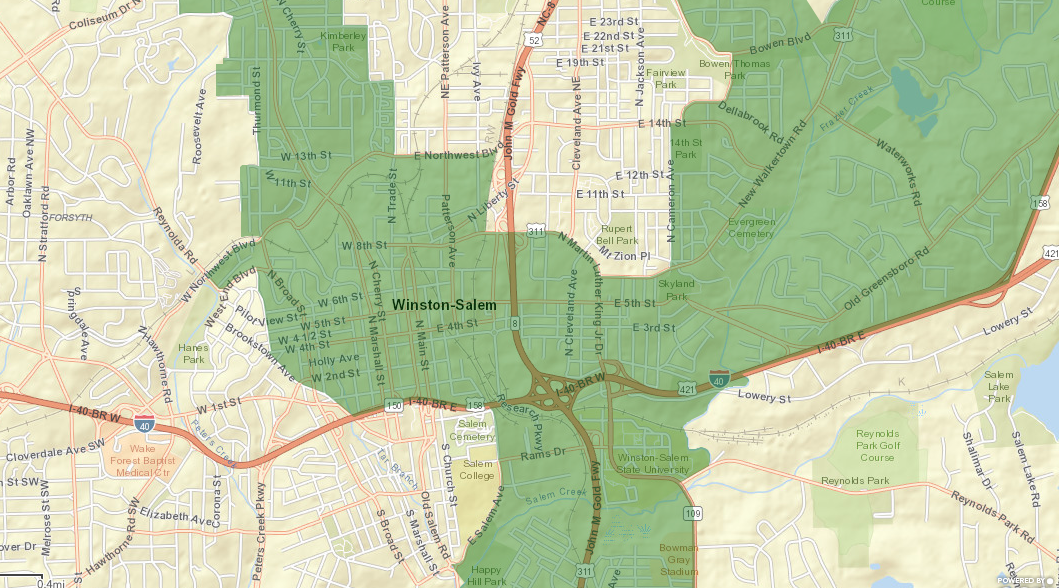 This map of Winston-Salem shows some of the areas marked as Opportunity Zones in green. There are 11 such designations in the area. Photo courtesy of the North Carolina Department of Commerce.

Not just anyone can take advantage of investing in an Opportunity Zone.

Here’s how it works:

Step one: an investor sells an asset and makes a profit, generating capital gains.

Step two: that money is reinvested into an Opportunity Zone fund.

Step three: a good deal of waiting. To get the full tax benefit, the investment has to be held for at least 10 years. Then the investor is permanently excluded from paying those capital gains taxes on it.

So, who exactly is making these investments, and how many have there been in Winston-Salem?

It turns out these investments aren’t directly tracked. The Winston-Salem Chamber of Commerce, champions of the program, doesn’t even know for sure.

“They’re private transactions between people, so we’re not involved,” says Owens. “So it’s hard for us to know the true number of transactions.”

City government also appears to be somewhat out of the loop. Business licenses haven’t been required in North Carolina since 2015, so cities don’t have a paper trail to know who’s opening up shop in an Opportunity Zone. Winston-Salem City Assistant Manager Evan Raleigh says there’s little limit on what those taking advantage of the program can build.

“Because it is private-sector led, and the government isn't actively sitting at the driver’s seat, and there’s no mechanism by which an Opportunity Zone would have to tell us, ya’ know, we’re really more in the observer role more than anything,” Raleigh says.

There are still zoning regulations in place that dictate what can go where, but the private market can make these investments in Opportunity Zones with little to no local oversight.

But what about those distressed areas that Opportunity Zones were designed to serve?

That's where Vincent Wilkins comes in. He and his cousin Marlin Wilkins started The Emergent Group to put together a homegrown Opportunity Zone fund.

“I’m not interested in downtown. Downtown is taken care of, pretty much,” says Wilkins. "But let's build up those individuals that are on the outskirts of it because they need the help too.”

Wilkins says that while their fund is still being developed, they have some ideas about what they would invest in — something like a mixed-use office and apartment building funneling into downtown. They say it’s a no-brainer to include some kind of housing, and would like to see more investors taking up that charge.

But pointing investors and developers into economically underperforming areas is a challenge.

“And I know it's difficult because most people say ‘Hey, it's in a place that's been a desert for economics,’” Wilkins says. “And that’s where me and Marlin come in, because we’re used to working in a place that was distressed for whatever reason. And distressed has so many categories.”

The development gold rush is happening right now, but this tax incentive is still in its infancy. It may be years before we see who's really taking advantage of it, and how it’ll shape the look and feel of Winston-Salem and the thousands of Opportunity Zones across the country.

Carolina Curious: What are the mental health resources for Spanish-speaking communities in North Carolina?

Carolina Curious: What's the meaning behind those letters on older brick chimneys?

Carolina Curious: Where did Union Cross community get its name?

Are pigeon populations declining in Greensboro?