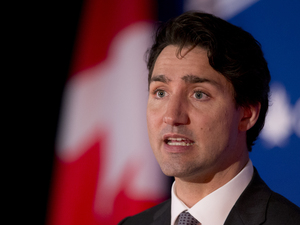 Canadian Prime Minister Justin Trudeau told a CBC radio show that his father, former Prime Minister Pierre Trudeau, who died in 2000, had prostate cancer and Parkinson's disease. He said his father would have liked to end his life with dignity.

The Canadian government has introduced a long-awaited bill to legalize physician-assisted suicide.

The measure limits the option to the incurably ill, requires medical approval and mandates a 15-day waiting period.

More than a year ago, Canada's Supreme Court struck down a ban on assisted suicide and instructed the legislature to write a new law. The newly unveiled legislation, which is being advocated by Prime Minister Justin Trudeau, needs to pass the House of Commons and the Senate to become law.

The bill introduced Thursday lays out the conditions under which some people would be able to obtain a doctor's help in dying. A patient must:

Then, reports NPR's Dan Karpenchuk, "a written request would be needed, signed by two independent witnesses — and there would have to be more than one medical evaluation and a mandatory 15-day waiting period."

Dan says it's widely expected that the proposed bill will face opposition from two directions — from those who object to physician-assisted suicide at all, and those who think the law doesn't go far enough in granting people the right to die.

The law was written after Trudeau assembled a special committee to examine the issue and write a report recommending how Canada could best legislate physician-assisted suicide.

The Supreme Court had originally given a one-year deadline for such a law, The New York Times reports, but the previous Conservative government didn't make much progress. The court extended the deadline when Trudeau's Liberal party took over, and legislators have until June to pass a law.

The issue is personal for Trudeau, as he told the CBC radio show "As It Happens" in February.

The prime minister says his father would have liked to end his life with dignity.

"Having suffered the death of my youngest brother Michel just two years before his own passing, he had sort of felt it was time for him to let go," Trudeau told As It Happens.

COMIC: How to break out of your pandemic slump

Studies suggest sharp drop in vaccine protection vs. omicron — yet cause for optimism

The UAE is adopting a 4.5-day workweek and a Saturday-Sunday weekend