Brussels Unites In Grief As Search For Attacker — Or Attackers — Continues

Brussels Unites In Grief As Search For Attacker — Or Attackers — Continues

And Belgium enters its second day of mourning, with an often-divided country grieving across divisions of language and politics.

Tuesday's attacks on the Brussels airport and a metro station have been claimed by the Islamic State. Two of the suspected suicide bombers have been identified by Belgian authorities as Brussels-born brothers Ibrahim and Khalid El Bakraoui, based on their fingerprints.

Both men had criminal records, but Belgian officials initially said they were unaware of any ties to terrorism. Turkey said Wednesday that in 2015, Ibrahim El Bakraoui was deported to the Netherlands and Belgian authorities were warned of his terrorist ties — but that he was released anyway.

Federal prosecutors in Brussels have also confirmed an international arrest warrant and a European arrest warrant were issued against Khalid El Bakraoui in December, in connection with the Paris investigation, Teri Schultz reports for NPR.

Khalid El Bakraoui was also suspected of having used a false Belgian identity card, in the name of Ibrahim Maaroufi, to rent a house in Brussels which may have served as hideout for the terrorist group. It was raided Dec. 9. 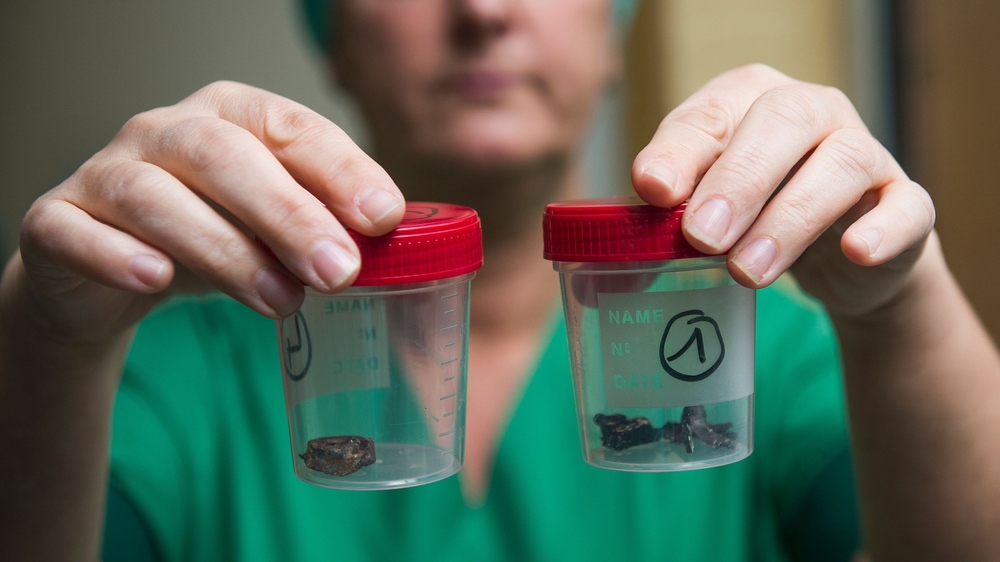 A nurse at the Campus Gasthuisberg UZ hospital in Leuven, outside Brussels, shows fragments of iron shrapnel from a nail bomb on Thursday, two days after a bomb attack hit Brussels' airport and the Maelbeek subway station.

Aside from the Bakraoui brothers, the identities of the attackers — and even the number of attackers — have not been definitively determined.

Police had initially described four attackers: Khalid in the metro, and Ibrahim and two unknown men in the airport.

Now, Belgian and French media are reporting that police suspect a second man may have been involved in the metro attack with Khalid El Bakraoui.

Here's The Associated Press on the reports, which have not been confirmed:

"Belgian state broadcaster RTBF and France's Le Monde and BFM television reported Thursday that a fifth attacker may also be at large: a man filmed by surveillance cameras in the Brussels metro on Tuesday carrying a large bag alongside Khalid El Bakraoui. RTBF said it is not clear whether that man was killed in the attack.

"Prosecutors, who have not said how many people overall may have taken part in the bombings, did not immediately respond to the reports."

Another outstanding question: Where is Najim Laachraoui? Laachraoui, a suspect in the Paris attacks whose identity was only discovered a few days ago, is believed by counterterrorism officials to be the maker of the bombs used in the Brussels attack. His fingerprints were found on the luggage bombs used Tuesday as well as explosive vests that were used in Paris, NPR's Dina Temple-Raston reports, citing counterterrorism officials in the U.S. and Europe.

Early media reports in the wake of the Brussels attacks suggested Laachraoui was involved but on the run, or was arrested by police. Now Belgian media are reporting he may have died in the attack.

A widely distributed photo from a surveillance camera, taken at the Brussels Airport, shows Ibrahim el Bakraoui in the center, Belgian officials say.

The man on the left, another suspected suicide bomber who hasn't been named by authorities, is the man Belgian media reports suggest has been identified as Laachraoui.

The man on the right is also unidentified — but believed to be alive. He's the subject of a massive search across Belgium.

Police are conducting raids and have requested that any bystanders with video of the attacks step forward, the AP reports.

The country remains at a high level of alert, and the Brussels airport will be closed through Sunday.

Abdeslam's arrest last week may have affected the timing of the Brussels attack, counterterrorism officials in the U.S. and Europe tell Dina. The full extent of his involvement in Tuesday's attacks is still being determined.

As Belgium enters its second day of mourning for the attacks, a fragmented country is drawing together, NPR's Eleanor Beardsley reports from Brussels.

Listen to the Story

The nation's deep divisions are believed to be a weakness in the fight against terrorism, Eleanor says, fostering dysfunction in the political system:

"The country is bitterly divided between French-speaking Wallonia and Dutch-speaking Flanders. These two sides have different cultural, social and political agendas. And in the last years, there's been serious talk of splitting the country in two.

"Brussels is technically the capital of Flanders, but the official language depends on the district where you live. There are two intelligence agencies and six police zones in a city home to only around a million people. ...

"But the terrorist attacks seem to be bringing Belgians of all stripes together. Hundreds have been gathering at a makeshift memorial in front of Brussels' historic stock exchange. They light candles, lay flowers and write messages of peace in chalk on the plaza. ...

"And Belgium's national motto appears to be making a comeback since the attacks — in Flemish and French. It translates: 'Through Unity, Strength.' "

This is a developing story. Some things that get reported by the media will later turn out to be wrong. We will focus on reports from police officials and other authorities, credible news outlets and reporters who are at the scene. We will update as the situation develops.

'Everything Broke': Global Health Leaders On What Went Wrong In The Pandemic