1 Day, 40 Boats, Thousands Of People Rescued Trying To Get To Europe

There were 40 boats — some inflatable rubber vessels and others made of wood — packed with thousands of men, women and children who had decided the sea was safer than the land.

They set out from Libya. They did not have enough fuel to reach Europe.

In just 24 hours, the Italian navy and vessels operated by aid groups including Médecins Sans Frontières and Proactiva say they rescued some 6,500 people. As the crews neared the dangerously over-filled boats, men in life vests hurled themselves into the water and swam toward the rescue vessels. Some people jumped overboard in just their clothes. Parents handed their babies to strangers in coast guard uniforms to get the infants to safety.

The International Organization for Migration, or IOM, says that in 2015 and the first half of this year, more than 6,600 people drowned or went missing in the Mediterranean after their boats capsized. The crossing is getting more deadly. About 2,700 people have died on the route from Libya to Italy this year, up from about 1,800 people during the same period last year. 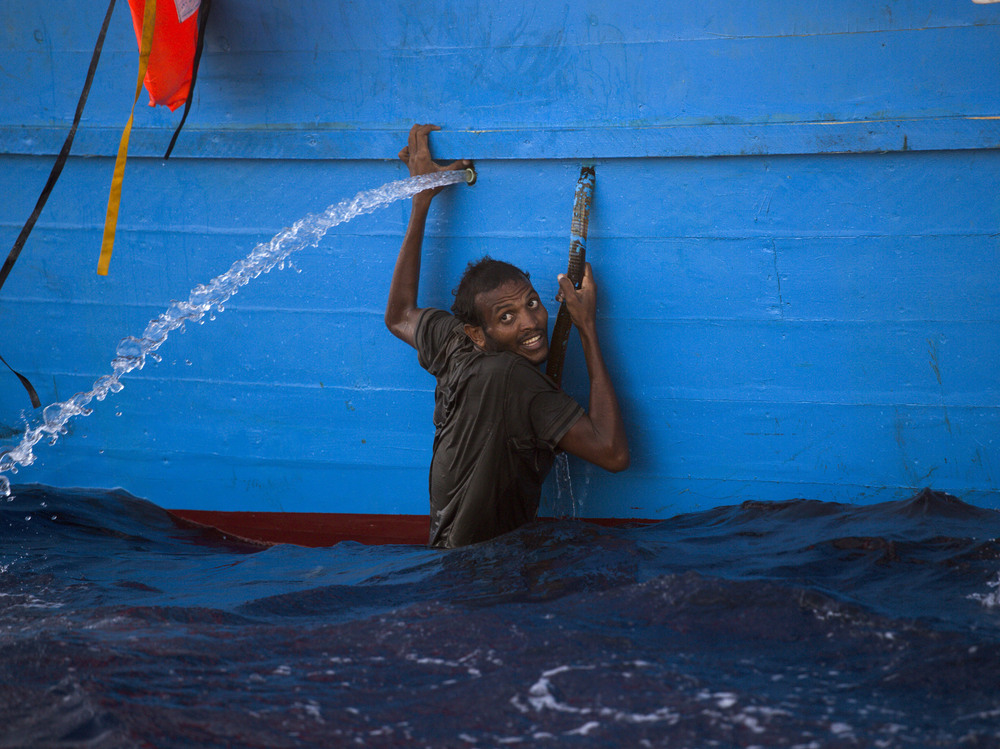 A man clutches the side of a boat after jumping into the sea during a rescue operation in the Mediterranean, about 13 miles north of Sabratha, Libya.

NPR's Lauren Frayer reports that, with migrants being turned back from Greece, many people fleeing Somalia, Eritrea, Nigeria and Libya itself are trying to get to Italy and Spain. But that journey, through the western Mediterranean, is often more dangerous than the trip to Greece.

For those fleeing terrorism, civil war and poverty, one of the most viable routes out of North Africa is through Libya. Despite five years of lawlessness and violence since the fall of dictator Moammar Gadhafi, the lax border control along the coast makes Libya a popular point from which to set off for Europe. 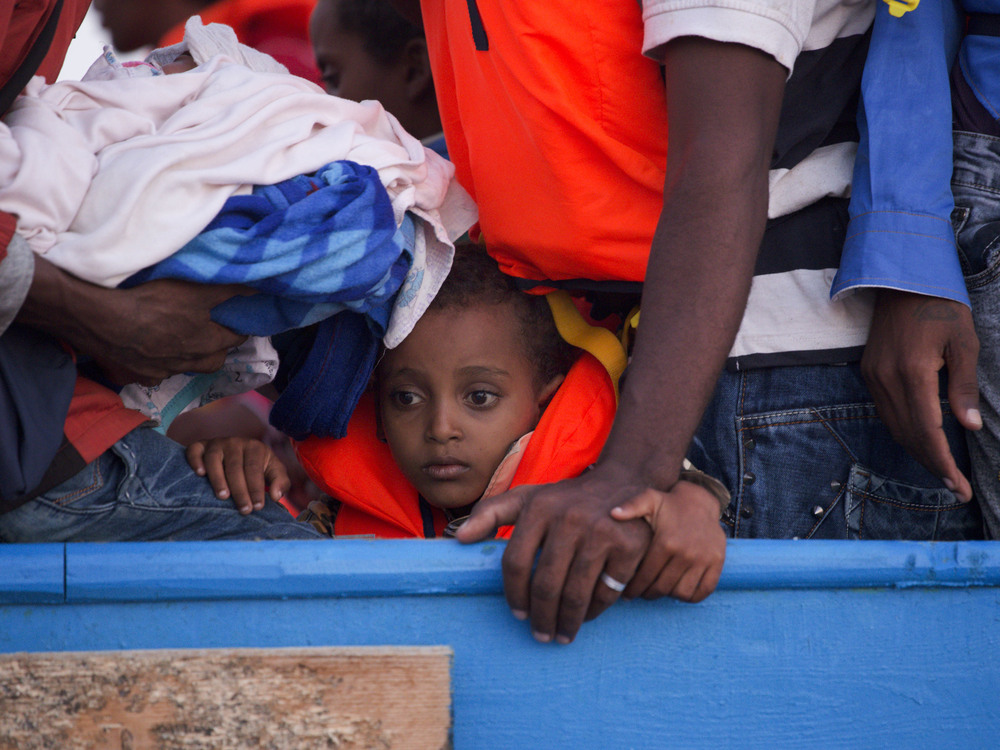 A boy is crowded among more than 700 migrants on a wooden boat before being rescued about 13 miles north of Sabratha, Libya. The boat was one of 40 vessels rescued on Monday.

The Libyan navy, controlled by a fragile new government and supported by the European Union, has been cracking down on vessels leaving from its coastline, and imprisoning thousands of people for attempting to leave through its borders. The Associated Press reports that about 3,500 migrants are being held, sometimes in brutal conditions, by the government, militias and gangs in Libya. The IOM says it recently helped release 162 detained men, women and children, and sent them back to their home country of Nigeria.

But once a boat makes it even 15 miles off the North African coast, ships run by the Italian navy and aid groups often launch rescue operations and transport people to Europe, at least temporarily. Médecins Sans Frontières is still transporting people rescued Monday to Vibo Valentia, Italy, where they will be treated for injuries, processed by immigration authorities and either allowed into Europe or sent back to their home countries.

We're always shocked to see how many #people can be crammed in boat. In this photo alone there are 700-800 humans. pic.twitter.com/NzHgTKEh2R

Despite the support of the EU, rescue ships do not always have a peaceful relationship with the Libyan authorities. MSF says a Libyan navy ship shot at one of its vessels over the weekend during a patrol about 25 miles off the coast.

And on the other side of the Mediterranean, a multiyear migrant crisis fueled by wars in the Middle East shows no signs of slowing. Turkey's coast guard has rescued 28,306 people this year as they attempted to make their way to Greece, according to the IOM. Some 2,300 migrants and refugees crossed into Greece in August alone.