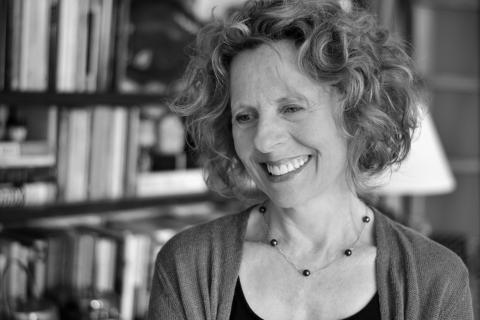 The reading will be preceded by a Craft Talk: What I Learned About Craft from Teaching Creative Writing from 12:30-1:45 pm in the Attic Window Room, 137-C Plemmons Student Union.

Abigail DeWitt is the author of three novels: LILI (W.W. Norton), DOGS (Lorimer Press), and NEWS OF OUR LOVED ONES (Harper Collins). Her short fiction has appeared in Five Points, Witness, the Alaska Quarterly Review, the Carolina Quarterly, and elsewhere. She has been cited in BEST AMERICAN SHORT STORIES, nominated for a Pushcart, and has received grants and fellowships from the North Carolina Arts Council, the Tyrone Guthrie Center, the McColl Center for the Arts, and the Michener Society.

Says Abigail DeWitt:
I was born and raised in North Carolina, but every summer, my mother, a French physicist, took my sisters and me to the Alps, where she ran a physics institute. In those days—the 1960’s—America was at the peak of prosperity, but France was still reeling from two world wars.
I write about growing up partly in a country that won the war, partly in a country still bruised by the Nazi occupation. What interests me is cultural dislocation, the ways people with different vocabularies describe the same moment, the relationship between loss and victory, light and dark.
I studied at Harvard University and the Iowa Writers Workshop and have taught at Harvard Summer School, Boston University, UNC-Asheville, and Appalachian State University. I was also the Writer-in-Residence at Lenoir-Rhyne University. Now, I lead private workshops, mentor people one-on-one, and teach through the Table Rock Writers Workshop and the Great Smokies Writing Program at UNC-Asheville.