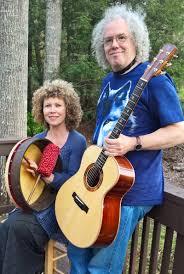 We’re really excited to be bringing in these two very talented
artists for what will undoubtedly be the best St. Paddy’s Day
show in town. Aoife Clancy is the daughter of Bobby Clancy
of the legendary Clancy Brothers and Robin is one of the best
acoustic guitarists and cittern players in the country. They are
both living in the Asheville area now and have joined forces
to become one of the best acts on the Celtic scene.
Aoife’s repertoire is a mixture of traditional and contemporary
songs. Scott Alarik writing for the Boston Globe said,
“Whether she’s delivering an ancient Irish ballad, an American
folk classic, or an urgent contemporary song, Aoife sings
with the same gorgeous naturalism as if she were experiencing
the emotions in the songs for the first time.”
Guitar Player magazine described Robin’s playing as “...breathtaking...
brilliant technique, always in service to the music.”
Robin has performed several times for Fiddle & Bow over the
years but this is Aiofe’s first time on our stage. This should be
a terrific concert!