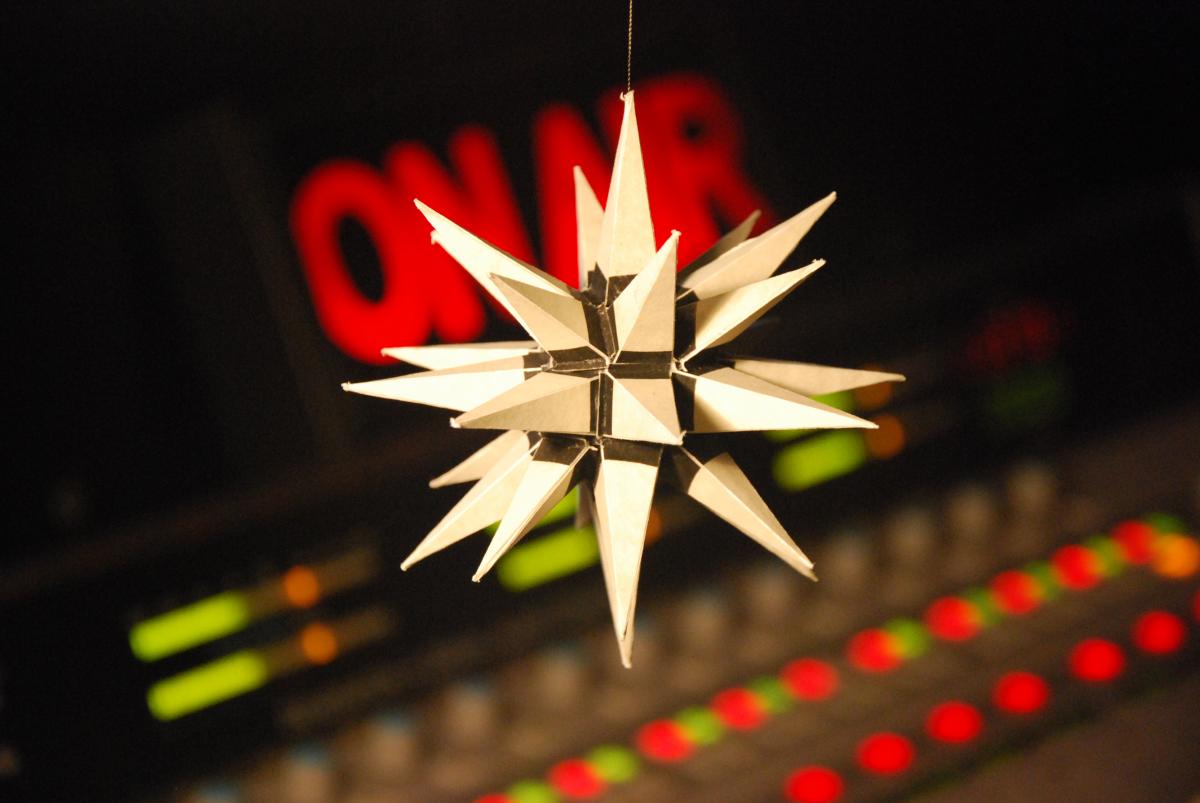 Make plans to tune in for one, or all, of these favorite and new holiday programs from American Public Media, NPR, and PRX. We hope that these programs add to your family's holiday celebrations, and maybe even create some new traditions.

December 1st @ 8pm
A Chanukah Celebration with Chicago a cappella - PRX
Sponsored by: Temple Emanuel GSO
Join Jonathan Miller, artistic director of Chicago a cappella and a longtime champion of Jewish choral music, for an inspiring and informative show featuring choral music set to Chanukah texts. Familiar tunes include "I Have a Little Dreidel" (both in its original Yiddish form and in a neo-funk Hebrew/English setting), a swing version of "S'vivon" by Steve Barnett, and a lively setting of the traditional melody for "Al-Hanissim" ("For the Miracles") by Elliot Levine.

December 20th @ 8pm
All Is Bright - APM
Sponsored by: A La Brava Hot Sauce
Hosted by Lynne Warfel, All Is Bright: Contemplative Music for Christmas features one hour of gorgeous, contemplative music related to the Christmas season and its symbolism. Presenting sacred choral music grouped in a way to tell the traditional Christmas story by way of songs about angels, the star, and the manger scene, All Is Bright includes artists such as Cambridge Singers, Cantus, and Chanticleer.

December 22nd @ 8pm
Christmas With The Tabernacle Choir At Temple Square - APM
Sponsored by: Moore Music
The sounds of the Tabernacle Choir at Temple Square floated into many homes during the holidays in the '60s & '70s on Goodyear and Firestone albums, bringing lush renditions of favorite Christmas carols. Those warm memories and feelings come right back again in this holiday special. The choir continues its tradition of great artistry with touching arrangements of familiar carols, and surprises with lesser-known melodies that are fast becoming the new classics.

December 23rd @ 8pm
St. Olaf Christmas Festival - APM
Sponsored by: Pennybyrn
A service in song and word that has become one of the nation's most cherished holiday celebrations. Tickets to the event - which takes place at St. Olaf College in Northfield, MN - are always gone months in advance. The festival includes hymns, carols, choral works, as well as orchestral selections celebrating the Nativity and features more than 500 student musicians in five choirs and the St. Olaf Orchestra.

December 24th @ 10am
A Festival of Nine Lessons and Carols - APM  (click to learn more about the service and its rich history)
Sponsored by: Pennybryrn
Hosted by Michael Barone, this is a live service of spoken word and music (choral and organ) broadcast from the chapel of King's College in Cambridge, England. The 30-voice King's College Choir performs the legendary Festival of Nine Lessons and Carols service of Biblical readings and music.

December 24th @ 8pm
A Chanticleer Christmas - APM
Sponsored by: Pennybyrn
A one-hour program of holiday favorites, new and old, presented live in concert by the superb 12-man ensemble known as "an orchestra of voices."

December 25th @ 6pm
Christmas with Morehouse and Spelman Glee Clubs - NPR
Sponsored by: Moore Music
Korva Coleman hosts one of the great holiday traditions in America: the choirs of Morehouse and Spelman Colleges -- two of the most prestigious historically black institutions in the nation -- get together to present a spine-tingling concert program. This encore presentation features the best works of the last several years. It's a joyous celebration of the schools' tradition of singing excellence, with their trademark mixture of spirituals and carols.

December 27th @ 8pm
A Season's Griot - PRX
Sponsored by: Crossnore and Embrace Inc.
This one-hour celebration in story and song is public radio's only nationally-syndicated Kwanzaa program. Hosted for 23 years by acclaimed storyteller Madafo Lloyd Wilson, this annual special captures the tales and traditions of African American and African peoples.

December 28th @ 8pm
An Afro Blue Christmas - NPR
Sponsored by: The Martha Bassett Show
Join us for a very special holiday concert with Howard University's premiere vocal ensemble Afro Blue and special guest pianist Cyrus Chestnut. Hear the a-cappella group perform a variety of holiday songs including African-American spirituals, jazz and pop tunes, and classical repertoire. The joyous celebration includes one of a kind arrangements on traditional holiday songs plus new compositions…music perfect for the holidays and the spirit of Christmas. Hosted by Michele Norris.

December 30th @ 8pm
Welcome Christmas - APM
Sponsored by: Pennybyrn
This perennial Christmas favorite is from VocalEssence, one of the world's premiere choral groups, led by Philip Brunelle. Join host John Birge for an hour of traditional carols and new discoveries.

December 31st @ 9pm - Midnight
Toast Of The Nation - NPR
Sponsored by: Moore Music
An NPR tradition every New Year's Eve since the 1970s, Toast of the Nation is the perfect audio complement for the occasion. It's festive jazz you can party to, all night long, and it’s sure to be a good time, even without big parties.

January 1st @ 11am - 1pm
New Year's from Vienna - NPR
Sponsored by: Pennybyrn
The Vienna Philharmonic presents its ever-popular annual New Year's Day concert from the Golden Hall of the Musikverein in Vienna. You'll hear your favorite waltzes, polkas, and more – a festive way to start off the New Year.